Did you take any photos during this hash? If so, load them on Picasa (or similar) and send us the link and we'll put it here.
x

Our hares today are Casual, ShitTalker, and Creamy
I can't think of 3 harierettes that are more dreamy

Fri, May 18th: JRH3 Trail #783Stumble through the Jungle Trail: Spicy Dick Slapper and Lock Jaws were the hares, Rectal was the FRB, Casual Friday was the RA and the FBI and HPV won the Brainless Award.
Fri at midnight/Sat, May 19th: Nakid Pirate H3 (unofficial JRH3 hash): Bring Your Own Full Moon Hash Trail: Spicy Dick Slapper & Lock Jaws were the hares and Ship was the RA
Sat, May 19thThe "Main-Event" Scallywags & Wenches River Rum Run & Paddle Trail: Casual Friday was the hare for the paddling trail and Shit Talker & Creamy Cum Cake were the hares for the foot/float trail. F*ckle Up was the RA, Hannibul Leopard was the FRB, YMCA was the FBI and IndaLinda & ShakesQueer won the Brainless Award.
Sat after midnight/Sun May 20th: Nakid Pirate H3: Plunder The Poop Deck Midnight Trail: Hannibal Leopard was the hare.

Choice of a New Penetration: "Look at that douchebag climbing that tree. He's gonna get himself killed. Wait....oh shit....it's Fairy!"

Math Sucks Let's F*ck: "He's sleeping in a pea pod."
Casual Friday: "Seriously bringing a hammock to sleep in is like shooting yourself in the foot. How do you have sex in that thing?"
Rectal Roomate: "Why don't you come over here and find out?"
Casual Friday: "He looks like he's being swaddled."
Virgin Mother Full of Chinchillas: " Is he even wearing pants?"

Inda Linda: "Aww look at Ship. He's got Christmas morning hair. He looks like he just ran down the stairs and screamed "Presents!!""

Diaper Dasher: " I warned you. If you drink that and you get raped don't blame me."
Hashers: "Umm but what if you're the offender?"

Hashers: "Hey it's probably not a good idea to sit on that."
Thumper Humper: "I'll be fi...(BOOM!)
Big Foozy Balls: "Oh my God are my speakers all right?"

F*ckle Up: "Star Wars should be part of school. Kids should be forced to watch it. It's a part of our culture."

Thumper Humper via the romance novel: "I guess she wanted an enriched vitamin facial to go with her spring water spa treatment."

Thumper Humper: "Act it out and don't say the word on the card."
Diaper Dasher: " I'm a little teapot."
Thumper Humper: (Facepalm) "The word WAS teapot."

Inda Linda: "I was having a moral dilemma."
Chorus of Hashers (Metawhorical Sunshine, Diaper Dasher, Monkey Poo and others): "Morals? What are morals? Is that like trying to figure out right and wrong? You probably meant more ale? A more ale dilemma. Well its solved. Go drink more beer."

Tag My Juicy Target: "Don't break it all up. I want to play with the fire."

P-Thag: " Look over there. Why it's the homosexual male. Let's listen to the mating call. Listen closely.........heee-eeey."

Mystery Hasher: "I couldn't get out of my tent. The zipper was stuck. I had to pee. Luckily I found a hole. Though I think I might have pissed all over my tent."

When Fairy Met Sally: " Why do I always end up throwing up in just my under wear?"

Urine Trouble: "I woke up soaking wet. I thought "Not again.". Then I realized I had spilled a Jack and Coke."

Shakes Queer to Muggles: "We're on the Mekong river now.Saigon Sally here will do the both of you for $7.50."
Inda Linda: "Noooo!"

A special thanks to Ship Wrecktum for making this possible. Also a big thanks to Dab and Spicy Dick Slapper for playing big parts and a thanks to all the hares and RA's. Listed below are individual trail details:

A bunch of us were set up by Friday afternoon. A generous DBH3 hasher prone to being pantsless by the name of Shakes Queer rounded a chunk of us to go tubing down the river. It was a tamer adventure but it was a pre-lube.

More hashers arrived and as soon as we settled Spicy's yucca, Diapers hooch lovingly nicknamed the "date rape" drink, Rectal's Apple Pie, the DBH3 Flambongo, the keg, and various other alcohols were responsible for the blurriness of the coming days.

2012 Jolly Roger Ginnie Trail 1 - Friday Evening
Hares: Spicy Dick Slapper and Lock Jaws
RA: Casual Friday
Trail was dark. There was shiggy with thorns. Diaper Dasher ran 7 miles instead of 2 or 3. There were cops. We got to check out the other campgrounds. End circle was a fun raucous. Big Foozy Balls went in for an amazingly timed nut punch. HPV got brainless. Good times.

2012 NPH3 Trail # 1
Hares: Spicy Dick Slapper and Lockjaws
What happens on the NPH3 trail stays on the NPH3 trail. Except my barbed wire scars. The energy was great on that trail. It's very much a "lets go streaking to the gymnasium" vibe. In all actuality it might have been more innocent than other trails I've done since everyone was so respectful but in a fun way, like a bunch of kids. I didn't get a drop of creepiness. Really a great experience.

2012 Jolly Roger Ginnie Trail #2
Hares:
Land Trail: Creamy Cum Cakes and Shit Talker
River Trail: Casual Friday
RA: F*ckle Up
On the land trail Swamp Nipples spanked a muggle with her paddles. There were several auto hashers and it took forever for everyone to get adequately pumped. I heard it was fun.
The canoe trail had 2 shot stops. Casual towed a cute muggle to a spring. Shakes Queer kept trying pimp me to people while pretending to be an old Vietnamese man. $5 for single, $7.50 for couples, $20 for a large group. Shakes Queer almost sold me to the group and then tipped our canoe. He made up for it with a bagel sandwich. We lost Monkey Poo for a bit.

Both of our groups joined downstream. At one point Pen looked up towards the trees said "Look at that douchebag climbing the tree. He's gonna get himself killed. Wait....oh shit....it's Fairy!". Shakes Queer decided to remind a drunken Fairy about the douchebag tree. On attempt number one he climbed about third of the way up, slipped, and slid all the way down the tree hitting a groove at the roots allowing him to continue falling over the rocks and into the water. It looked painful and it was hilarious. On the second attempt he made it all the way up grabbed the rope and realized the floatilla of hashers were under him. It was too late he let go and narrowly missed the floaters. Swamp Nipples did a karate kick off a canoe. Creamy was trying to drown F*ckle with her thighs. Our Marines were trying to take care of each other. I got tired of paddling for the floatilla and in true hash form said "F*ck this !", jumped off, and twirled my ass down the Santa Fe. End circle was a blast. It was drunk and disorderly. I got brainless with Shakes Queer. F*ckles "Swing Low" mission was sabotaged by all the hashers.

2012 NPH3 Trail #2
Hare: Hannibal Leopard
RA: Ship Wrecktum
From what I hear there was a water crossing that most hashers didn't do and a shot stop. Then a gang of underage muggles showing up at end circle. I unfortunately slept through this one as I had too much of the hooch. But it was really comforting being half awake and listening to Ship's end circle and listening to everyone laugh and be happy.

Sunday: Lazy River Adventure: Host Fairy climbed the douchebag tree again and almost landed on the hashers again. It looked way better this time around. Mouth and Creamy straddled a bunch of floats. Goes Down Easy was determined to get the last beer.

Thanks: Thanks to Ship Wrecktum again and all who came. It was a blast!

With minor editing and additions by Dab 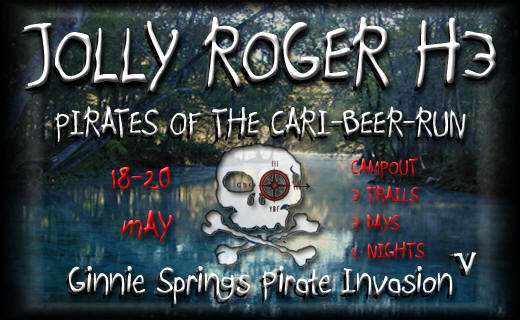 WHAT: Meet and camp out at Ginnie Springs Park (Deer Springs Campground area in the NW corner of the park), a private water recreation area where open drinking is legal. It's located at 7300 NE Ginnie Springs Rd, High Springs, FL. It's about 150 miles north of Tampa. WHEN: Arrive anytime after 8:00 AM Friday morning, May 18th and depart at least 1/2 before dusk on Sunday, May 20th. Trails will start at 8:30 PMish on Friday night, at noonish on Saturday for the main event and some time after midnight for the Sunday morning May 20th hash. Rumor has it that there might even be a "special" extra hash after midnight, Friday night.

The "Main-Event" Scallywags & Wenches River Rum Run & Paddle Trail. This is for those in kayaks as well as those on foot. The paddle trail and foot trail meet at some point and the entire group will float back to the start. You will need some sort of a floatation device for this trail (kayak, canoe, raft, tube, etc). You can rent one there or bring your own. Casual Friday will be the hare for the paddlers and Shit Talker will be the hare for the foot trail.

SUNDAY SUNDAY SUNDAY: Sometime after Saturday midnight, early, early Sunday morning, May 20 there will be a Plunder The Poop Deck Midnight Trail. The hare will probably be Spicy Dick Slapper. This will likewise be an non-official JRH3 hash (so anything goes!)

FOOD: This is a Bring Your Own Food event! However, they do sell some food next to the Ginnie Springs check in office.

TOE TAGS & T-shirt: There will be personalized toe-tags and T-shirts for those who RSVP and pay in advance.

COSTS: $85 per person gets you 3 days and 2 nights of camping, 4 trails, beer from Friday at noon to Sunday at noon, an event T-shirt and a personalized toe tag. $18.72 per night goes to the Ginnie Springs to pay for your camping fees. Contact Ship Wrecktum for rates if you need to adjust to anything other than our 2 night campover weekend. Camping at this rate is available for an unlimited number of nights in conjunction with this this event, but you may not be able to camp in our same area for the other nights if another group reserves it before or after our weekend. When you arrive, tell the person at the gate you are with the Jolly Roger H3 group and you will be directed into the Ginnie Springs Office to sign in. DO NOT pay them anything. The JRH3 will pay your camping fees for you at the "group" rate. If you are not on our list you will not be allowed to camp in our area or participate in our events! If you arrive after hours, just come to the campsite and then go sign-in in the morning at the Ginnie Springs office.

OTHER FEES: Kayak, canoe and inner tube rentals are extra and are paid directly to the park. Snorkeling and scuba diving equipment is also available and extra if you are so inclined to do that as well. All this equipment can be rented at

"NO GLASS CONTAINERS OF ANY KIND ARE ALLOWED AT THE CAMPGROUND!"

RSVP: Send your RSVP via text to

813-817-0363 or just call the number and ask for Ship Wrecktum. Include the following information in your RSVP; 1. Your "Real Name": Your "real name" will be added to a list letting the Ginnie Springs staff know you are with our group and not to charge you separately for camping or entrance to the park.

3. Your Home Hash: This is the primary hash you identify with.

5. Approximate Arrival & Departure Dates & Times: We need this so we will know how much to charge you if you camp over more or less than 2 nights.

HO'S COMING SO FAR: Click here to see who's coming so far.