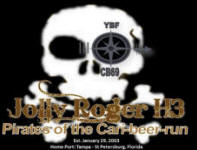 There is no steadfast rule about namings in the Jolly Roger H3. You may have heard that you get named on your 5th JRH3 hash. This is not true. We've named people before that have never even done a hash before. We named them during an on after they showed up to before ever even accomplishing their first trail. It all depends upon what you do. When you do something that makes you stand out we try to name you for it. We normally don't make a conscious effort to consider naming someone until they have done at least 5 JRH3 hashes. Haring a trail for the JRH3 will usually speed the process up. Once you have accomplished 4 JRH3 trails we try to put your name on the RA's checklist as a potential naming for your 5th appearance. When you have accomplished 10 JRH3 hashes and you are still not named, we begin to get embarrassed and we will pretty much insist that you get named real soon, depending upon how many hashes you miss in between your 10 trails. If you miss 10 hashes in a row you will not normally be considered for a naming until your attendance is at 5 out 10. And, Wednesday nights are not a good time to get named because most people have to get up early the next morning and go to work, so we really don't have the time. If everything goes smoothly and we find we do have time, we may conduct a naming on Wednesday, but you are much better off waiting for a Saturday hash when the pack is generally smaller and we have more time. Filling out a naming form after 5 trails and turning it in to the Name Meister is a real good way of getting our attention. Please feel free to print out the form from the website and fill it out prior to arriving at the hash, as it will save thinking time and allow more time for you to drink beer. Click here for a naming form.

When an un-named hasher is observed doing or saying something that really stands out and the observer thinks they should be name in reference to this action/verbiage, the observer shall do a point of lager during the circle at the end and ask the group for a consensus. The vote generally must be 100% unanimous, except for other un-named hashers, who are not permitted to vote.

If a named hasher does not believe they were name properly, or just hate their name and want to be renamed, they can request a re-naming. The hasher requesting a renaming must realize that the new name may very well be worse than their original name. Good reasons to be renamed is if the name is  construed to be offensive due to race, religion or politics.

The above guidance is just the opinion of the JRH3 founder and can always be overridden by the whim of the pack, because, as always, the pack rules.