Did you take any photos during this event? If so, load them on Google Photos, or similar, and send us the link and we'll put it here.
Please be sure to check back as more photos will be added to this site over the next week or so.

The below is what I, Yours Truly Dabadoo, was going to conduct if I wound up RAing for this hash again if no RAs showed up. Luckily for me though, Dark Helmet showed up and agree to act as RA, as he always does when asked. Thanks!

You can borrow a flashlight from the beer truck if you need one.

In the name of the flour, the ale
And the shitty trail

Which way is on out?"

Instead, Dark Helmet conducted a standard hare blessing/toast similar to the one below/

Shitting Bull and Math Sucks.. were the hares, Dark Helmet was the RA, Bovine From Behind was the FRB, On Ahead was the FBI and O-4 Whore won the Brainless Award.

Our hares, Shitting Bull and Math Sucks.., laid a semi-live trail. That's where most of the true trail is pre-laid in advance and the checks, count backs, etc are added later by a live hare following the pre-laid true trail. What's good about it is the live hare can still be caught and the pack has a sense of urgency to catch the hare. Math Sucks laid parts of the semi-live trail and then drove the beer truck, while Shitting Bull laid the live parts with a 10 minute head start from the start.

Dark Helmet did his usual awesome job of RAing both circles except the Swing Low, which was reserved for me, Dab, to do.

Bovine From Behind was the FRB because it appears 2 Rung Circus did extra mileage, again, to get a better running workout. On Ahead, a walker, just happened to be the FBI. None of the ladies ran trail and they all came in about the same time, but On Ahead accidentally arrived at the end first.

There was one virgin at this hash, Virgin V, a former bar tender at the Hard Rock, turned college student. He entertained us with a hilarious joke about how some guy named his 3 daughters. Ask him about it next time you see him, if you weren't there to hear it.

During accusations, yours truly, did and "honorary" down down for my oldest son, Ryan K Geers, who passed away last week. He was 44 years old. He had hashed with the hash I started in St Louis, the Big Hump H3, several times, so it wasn't like he had never hashed before. On Up!  This was kind of a buzz kill, but I felt it necessary to pay tribute to him somewhere, so what better time and place than during a Jolly Roger H3 hash.

During announcements, Math Sucks.. announced that the next trail, on next Wed, Sep 1st would be hared by Metawhorical Sunshine and Tainted Love. The exact starting location is still to be determined, but we suspect it will be west.

The Jan 2022 hash cruise was announced to be closed due to attaining our cap af 69 hashers. But for anyone still wanting to go, it was advised to stand by as there will likely be some cancellations between now and then.

Yours truly, Dababoo, conducted a super short version of Swing Low that went "Swing Low, Lets go... to the bar!".

Several hashers appeared to be headed to the on after, but if I can't see the on after bar from the start, I normally head home. I did, however, stop at a Subway on the way home to get something to eat. I know, TMI...

On On
Dab
JRH3 GM, Founder, On Sec, Hash Cash and Scribe for this trail. 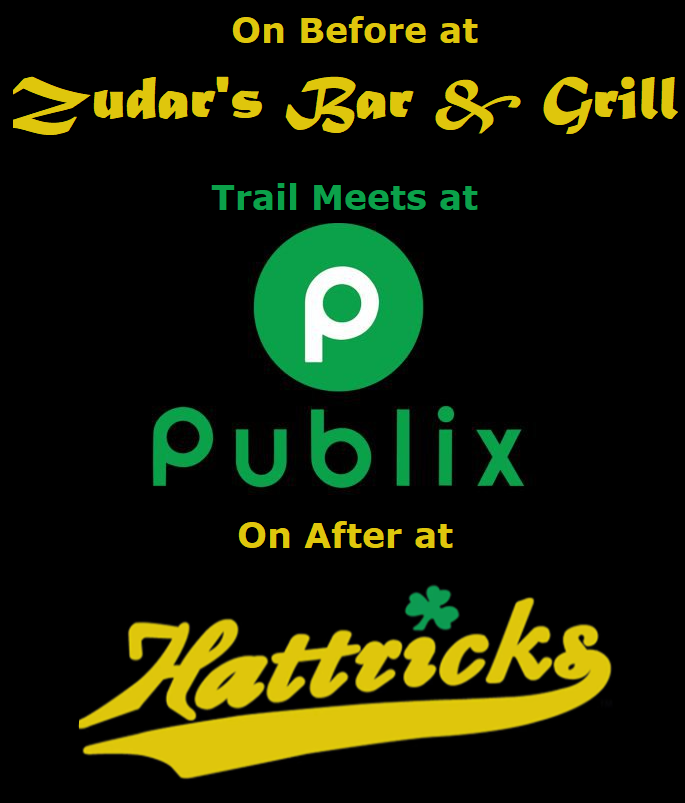 Special Parking Notes: There is limited parking at Publix and there are tow signs. If you go to Zudar's, park your car there and leave it. There's also street parking in between Zudar's and Publix on Parker St, and plenty of parking at the Bank of America and Walgreens 2 blocks away on Platt. We're sure you all will figure it out.

https://fb.me/e/N3KifW19  send an email to dab@jollyrogerh3.com, or a text to 813-943-4855 (any media accepted). Let us know if you plan to attend so we can properly plan to support you. Let us know your beverage of choice and we will try to have it for you at this trail.