TACO was the hare (Buffy needed to cancel), Shitty Name was the acting GM, Beer Meister and RA, Diaper Dasher was the FRB, C'nt Jungle was the FBI and Willy Wanka acted as Hash Cash and On Sec. Two Thighs acted as Hash Flash and TACO won the Brainless Award for having to leave the hash before circle. Just Ricky (W) was named STD (Small Turtle Dick). 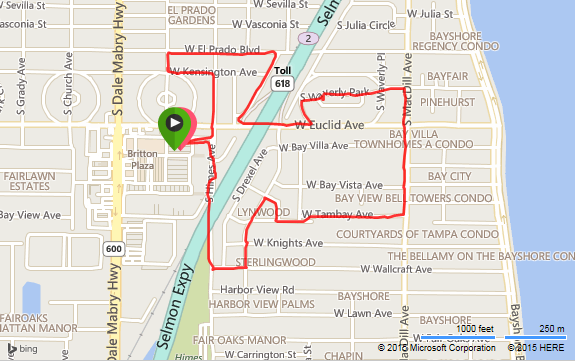 This is the route Shitty Name did while following trail.

Where: Meet in the parking lot about 75 yards west of the Tapper Pub, in Britton Plaza, located at approximately 3938 S Dale Mabry Hwy, Tampa, FL 33611, http://goo.gl/maps/eIyUg.

Directions: From I-275 & Dale Mabry, in central Tampa, go south on Dale Mabry for 3.1 miles and find the starting location on the left in Britton Plaza, http://goo.gl/maps/xKbXg.  Trail: This will be 3+ miles trail with a shiggy level of 1, on a 1-5 Scale, with 5 being the toughest.

Watch out for safety hazards along trail! Try to stay with the pack, or at least one other person. Nobody should ever do trail alone. If you see anyone behind you, alone on trail, slow down and wait for them.

TACO & Buffy The Bike Bitch Slayer. On After: The on after will be at the Tapper Pub back at the start. Phone Number: For more information, or in case you get lost, call our mobile phone at 813-943-4855. Receding Hareline: Click here to view it.