Yours Truly, Dabadoo was the hare, Kitty Litter was the RA, Whiney Bitch was the OnSec, Taint Tickler was the FRB, Jacuzzi Floozie was the FBI and Buffy The Bike Bitch Slayer won the Brainless Award, HPV & Liquor In The Front Poke Her In They Eye both manned the beer truck at the beer stop. 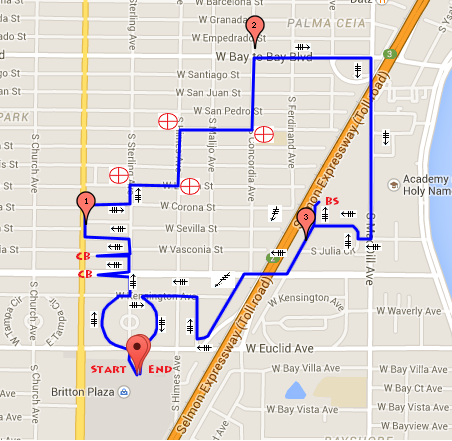 Meet at 4 PM (changed from 3 PM) for the hash, or if going to the parade, suggest meeting other hashers around 1:30 PM and walk eastward on W Euclid Ave to Bayshore Blvd. Immediately following the parade, proceed back to Britton Plaza and attend the JRH3 Anniversary Hash. The kegs will begin flowing about 4 PM. Pack away on trail about 5 PMish (changed from 4 PM). Please note, the meet and pack away on trail times fpr the hash has been moved forward 1 hour to allow more time for hashers to come from the Gasparilla Parade to the hash.  Directions: From I-275 & Dale Mabry, in central Tampa, go south on Dale Mabry for 3.1 miles and find the starting location on the left in Britton Plaza, http://goo.gl/maps/xKbXg.  Trail: This will be an pre-laid, dead hare trail with a shiggy level of 1, on a 1-5 Scale, with 5 being the toughest.

Safety: Try to stay with the pack, or at least one other person for SAFETY SAKE! Nobody should ever do trail alone. If you see somebody behind you that is by themselves, slow down and wait for them. We call this the BnB Safety Buddy System.

Hash Cash: $22 for beer drinkers and $19 for non-beer drinkers. Subtract $15 if you DO NOT want the Anniversary T-shirt.

Dab will be the hare. On After: The on after will be at the Tapper Pub back at the start. Phone Number: For more information, or in case you get lost, call our mobile phone at 813-943-4855.

RSVP: Please let us know if you plan to attend and provide your MEN's T-shirts size and preferred color. They come in red and charcoal grey.