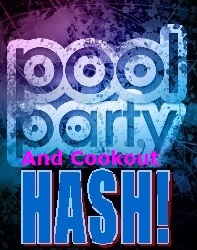 Diaper Dasher & Just Will were the harea, Sloppy Red Wings was the FRB, Access All Areas was the FBI and the hares won the Brainless Award.

As some of you may or may not know I’m the Jolly Roger scribe. This means I’m supposed to do write ups for the Jolly Roger events and have them displayed in the “Trash”. I’ve had a good case of writers block for about a year and a half so I’ve decided to officially relinquish the position. I’m going submit a few new trashes over the next few weeks so our new scribe can have a reference of what a trash can be like though there are no rules set in stone. You can write in any style you want from short and sweet to a psuedo novel. As for the new scribe we don’t know who it is yet. Hopefully someone will be interested and step up.

So without further adieu...

So there I was in the sweltering heat and I could only see the neon of Swamp Nipples shirt up ahead. “Ranging!” she happily yelled. At this point Whiney Bitch and I were following pack arrows for a few blocks. Access All Areas and Will Sing appeared in the distance and after a few minutes they had literally circled around the same corner several times. When they disappeared Whiney and I decided to forge our own trail and eventually caught up to flour marks and runners. Mother Chalker had a lot of inquisitive energy “What is NATE?” “Where is the end?” and “What happens if we go down this street?” he could basically hold a full conversation while running amock in those blue and white striped socks.

Fast forward to an hour later and now we’re all in the pool and for a few minutes the horrible heat was worth the pleasure of the cool water. As I take it all in I suddenly get splashed in the face by Kitty Litters ball. I turn to wipe my face and see Foozy cheesing in place and making sexual puns, I missed Foozy. Halfway through circle the security teenager makes a stop to inform us of our loudness, we agree to keep it down (of course we don’t), and Rectal points out his utility belt is only holding an iPhone.

A moment later Sloppy Red Wings explained how he snared Just Will by pretending to be a muggle, tackled him, made Just Will fall face down into the bushes, and described their position as being “nut to butt”. So henceforth and forevermore Just Will is now known as Nut to Butt.

The winds picked up, the temperature dropped, half the hashers hid in the hot tub, and the other half found comfort near the grill. No more than 5 minutes later the sky opened up and everyone was in a mad rush to save food, phones, speakers, and towels. We all huddled half drunk in the hallway clutching our things. A little rain never keeps the hashers from having fun but it was my queue to leave. I said my good byes and poor Just Ricky still look exhausted from him and Nut to Butt having to haul a large handicapped muggle up a flight of stairs wheelchair and all. With a burger in my belly and my bare feet in the grass I thought to myself “f#$@ that was a shitty trail” and then I went home to fight a fever my body produced from trying to deal with the temperature extremes. :)

---Thank you to Diaper Dasher and Nut to Butt for a great hash, letting us into their pool, and for providing food for all of us!!!!!

And here's another version...

It was a hot and sultry day with threatening clouds in the distance for the 35 faces that showed up for the hash. The promise of a pool party afterwards was surely the reason there were so many. After the starting location was moved from one side of the apartments to the other and the RA took charge of the beer cooler for the end, the hares were blessed and sent off to lay this live trail.

Just Dennis (W), a transplant from the Jacksonville H3 (Jacksonville is gay, hey!....) was introduced to the pack, previous FRB Kitty Litter and previous FBI, Swamp Nipples, were given the appropriate chains to carry with them on trail and asked to do pre-trail down downs, to slow them down down. However, being a gallant lad, Big Foozy Balls volunteered to carry the light weight plastic FBI chain for his wench, Swamp Nipples. Then Kitty Litter, did a chalk talk and the pack set out on trail in hopes of catching the hares.

After some problems with over tasking the beer van with beer stops, the entire pack finally made to the end with only one casualty, who became too overheated and felt it best to just go on home.

Overall trail received a lot of thumbs down, due to beer stop malfunctions and the hares getting caught, but the actual route was deemed as pretty good.

Sloppy Red Wings was recognized for being FRB and Access All Areas for being the FBI. Whiney Bitch was awarded a headband for accomplishing his 200th JRH3 trail and gone too long Semper Bi was recognized for her excessive absence.  Semper, along with HPV, U-Drive, Extended Dick Network and his wench, Just Laurie were then chastised for being late comers. Out-of-town-returning visitor from Sarasota, Mother Chalker, was asked to drink and then we moved onto the Brainless Award. The hares overwhelmingly won the award for the aforementioned complications. But thanks for volunteering to lay trail for us!

Hare, Just will, was instantly named "Nut-To-Butt" (refer to Inda Linda's hash trash above for the reason why).

Security showed up and told us to some of the apartment residences had called to complain about the noise, so we quickly rapped things up and ended circle with Swing Low.

Accolades go out to Puppy, who acted as hash cook even while it was pouring down rain.

All in all it was just another shitty hash!

The next Jolly Roger hash will be a Hooter's Hash, on Wed, Jun 18th at 6:30 PM. Meet in the vacant lot between Hooter's and Dunkin' For Donuts, located in the SW corner of Gandy and Manhattan. Wear Hooters apparel, or at least orange and white. For complete info, go to http://jollyrogerh3.com/2014_06_18_Directions.htm.

Directions: From I-275 go east or west towards downtown Tampa. Take Exit 44 onto Ashley Dr for 0.2 miles and make the first right onto Tyler St, which merges onto Cass St. Continue on Cass for 0.7 miles. Go right on Oregon Ave for 1.5 blocks and find the starting location on the right, https://goo.gl/maps/ebl1P.

Hash Raffle: Bring stuff to donate to the hash raffle, if you like (we are especially looking for those DVDs you won at previous raffles; gotta keep circulating them ya know), or not. Don't worry about it if you don't have something worthwhile to donate. There will be plenty of items already in the raffle. On the other hand, one hashers trash is a pirate hasher's treasure!

Donations: Suggest $7 for beer drinkers and $4 for non-beer drinkers for the actual hash. However, the pool party & cookout on after are FREE!

Diaper Dasher & Just Will will be the hares.

The on after will be Diaper's and Just Will's apartment pool, located across the street from the start, where they will be having a cook out and a pool party. So bring a towel and a swim suit. The food and beverage will be on the hares at the on after.

Who's Coming So Far: Click here to see who's coming so far.