Did you take any photos during this hash? If so, load them on Picasa and send us the link and we'll put it here.
x

Metawhorical is rockin' Big Red
That bike's a bitch, vagina's have been shred

GRC and Triple D got it going on
If you face-plant today, you will be called upon

Deraileurs no drop us
and bellies no flop us

GRC & Call Triple D were the hares, Casual Friday was the FBR, Lepracock was the FBI and Sweedy Gonzales won Brainless Award.

Wow, what a fantastic ride Sunday! Thanks to all wanks who shared their Sunday with the Jolly Roger H3 kennel, YOU GUYS ROCK! Huge thanks to GRC and Call Triple D who spent hours in the hot sun fighting heat stroke, to lay a fun trail for all of us! Thanks go to Ship for keeping our circle on track, though I dropped a ball or two while screwing around instead of covering his toddler ass. Beer Angel? I simply do not remember… but I blame Ship for pulling me in circle every time my mug was full.

Are you ready to play “Where you paying attention?”

1. Who cheated to get the chainless FBI?

3. Who slept through a bartered sexual favor wake-up call?

7. Who pulled a Blind Pussy move?

8. Who rode to Busch Gardens?

9. Who will not get poison ivy rash this time?

12. Who tore up her/his seat cover due to excessive grinding? 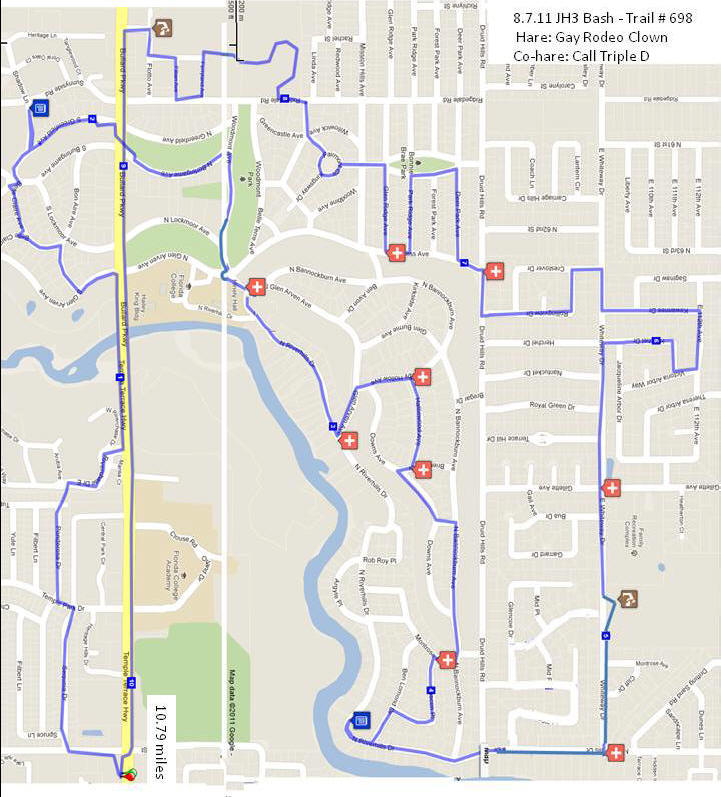 Trail: This will be a 10-15 mile mostly street pre-laid trail. Any kind of bike can be used.

GRC & Call Triple D will be the hares.

Suggest $6 for drinkers and $3 for non-drinkers.

The on after will be at the Shamrock's Ale House where they will have drink and food specials.